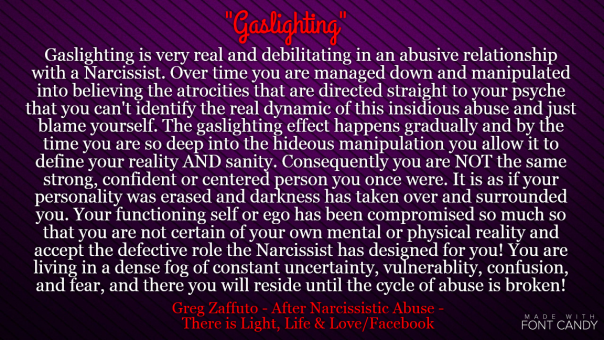 The more I learn about narcissism and the techniques used by narcissists, the more I understand what was happening in my own life. My Narcissist used gaslighting to the extreme, and I finally now understand why I felt so freaking confused for so long. So first, what is gaslighting?

Gaslighting or gas-lighting is a form of mental abuse in which a victim is manipulated into doubting their own memory, perception, and sanity. Instances may range from the denial by an abuser that previous abusive incidents ever occurred, up to the staging of bizarre events by the abuser with the intention of disorienting the victim.

My Story of Gaslighting:
On-top of the ‘standard’ mental and emotional abuse that comes along with marrying a narcissist, my Narcissist became physically abusive pretty early on. I withstood three years of relatively constant physical abuse. It ranged from slapping, pinching, poking, pushing, hair-pulling, and choking. He never left visible marks, and very rarely left any physical evidence behind at all. In the entire three years I can only remember a few bruises and a purple lip. I became the outlet for the Narcissist’s full range of anger… everything from the traumas he had experienced at war to the trauma he had experienced in childhood… I somehow became the whipping post.

I eventually reached my breaking point, and found the courage to pack up and leave. I flew across the world, took all of my belongings, and went home to my parents. As with many stories of domestic abuse, I eventually believed the Narcissist’s pleas and promises and I ended up going back. My one condition with the Narcissist was that I would only return if the physical abuse ended. The real mind-f*ck and beginning of the gaslighting in my story began from this point on. You see, the Narcissist actually stopped physically abusing me. In the early days of my return he had a few flare-ups and regressions, but within 6 months of my return the Narcissist stopped the physical abuse completely. The last 5 years of our marriage have been chock full of emotional and mental abuse, but not a single instance of physical violence.

From this point on, the Narcissist made me the monster. I was dealing with significant trauma from the years of abuse, and I had developed some intense triggers and intense anger towards him for the things that he had put me through. The Narcissist used every single reaction, every single tear, every single defensive reply, and every single sign of anger from me as a way to show me that I was not thankful for him, I was not compassionate, I was unforgiving, and ::gasp:: I was actually the one abusing him. The Narcissist regularly pointed out to me that he loved me enough to stop his anger and stop his physical abuse… and then turned the tables to point out that I must not love him enough to be able to give up my anger.

For the past 2 years at least, I have been in a fog of self-doubt, I have constantly felt like I was not being good enough, and I have been severely depressed. I have read more self-help books about controlling anger, calming triggers, changing reactions, choosing love than I can even remember. Ironically, the thing that drove me into therapy to begin with was that I honestly thought that I was battling an issue with anger and that if I didn’t get help that I was destroying my marriage. Within the last 4 months of our marriage I began attending accupuncture and EMDR therapy to help me with my triggers and my angry reactions, thinking that I was the problem and that I needed to seek help to be the type of wife that my Narcissist deserved. (Lucky for me, the EMDR therapy sessions actually helped me start to sift through the mental mess, and realize what was really going on.)

The gaslighting literally left me feeling like I was crazy. I felt like I couldn’t figure out reality. I felt deep inside of me that something was very wrong… but I couldn’t pinpoint it. I would enter into a conversation with the Narcissist feeling convicted and knowing my perspective and I would get so turned around that I would come out of the conversation agreeing with him… and usually apologizing. I felt like I was being abused, I felt like I was being mistreated, and I felt like things in our marriage were anything but normal. Yet somehow the Narcissist would always remind me that he stopped abusing me 5 years ago, and that I was the one who was angry.. I was the one with triggers… I was the one who was depressed. I couldn’t quantify anything, I couldn’t win any argument… I literally believed that my marriage was crumbling because of me, and yet no matter what I did to try to fix myself and fix the problems, things never got better.

Even now, the few random texts I will get from the Narcissist (that I do not reply to) will say something along these lines: “You are the one who walked away from our marriage, you are the one who gave up on us. I was there supporting you to the very end, and you didn’t want to choose love, so you chose anger instead. You think you know the man I am, but you are confused with the man I used to be. You are stuck in the first 3 years of our marriage and cannot see the man I grew into. You don’t know me.. you just think you do.”

It still takes work, almost daily, to be able to see the marriage for what it really was and not get caught up in the self-doubt, blame, and crazy-making that the Narcissist put me through. Distance definitely helps me keep my perspective and not get sucked into the gaslighting again. Going full-on no contact was the absolutely best thing that I have done through this divorce.

If you think you are in a situation where you are being gaslighted, there are a ton of great resources available on the internet. I have listed a few good ones below. My other advice is really just to listen to you gut. You know… deep down somewhere that you are not crazy. You know that if you told your family, your friends, even complete strangers about the things you are dealing with that they would tell you – its abuse. Don’t get sucked into to the narcissist’s techniques! If you are going through a break-up or divorce with a narcissit – cut off all communication, it is the fastest and easiest way to clear their gaslighting out of your life and begin to see reality.

Are You Being Gaslighted?

The Effects of Gaslighting in Narcissistic Victim Syndrome (*Source)